AUDIENCE THEORY
Write your own definitions for your notes: you can download the presentation at the bottom of the page to help, or look here. This might help too.

Gladwell's book focuses on 'social epidemics' - things which become very and unpredicatbly popular for a while. An example might be certain videos which become viral successes. He has a few ideas about why some things reach and exceed the 'tipping point':

THE LAW OF THE FEW - '80% of the work is done by 20% of the audience.' This might be a refinement of two-step flow; most persuasive media content is aimed at a small proportion of the audience. Gladwell focuses on that 'useful' 20% and divides them up thus:

CONNECTORS - people who link groups of people together.
MAVENS - Experts and knowledgeable people who advise and help others. The 'afficionados', often.
SALESMEN - People who attempt to persuade others to use certain products or consume sertain texts.

Gladwell also talks of 'The Stickiness Factor' - the 'memorability' of cerain messages. Advertises will use rhyme, imagery, shock, repetition and so on to boost the 'stickiness' of their message.

Finally, he also mentions CONTEXT - it is important to realise that, for example, an advertising approach that might work in one place at one time might not work in another.

IMAGINED COMMUNITIES - Benedict Anderson
Anderson points out that a 'nation' is a completely imaginary, made up community of people - there is nothing much that separates American from Canadian (or British or Australian or Chinese people except that a hypothetical community has been established. We see this attempt to establish imagined communities in advertising, where people are 'grouped' according to psychographic categories (see below), or in sports, where people are encouraged to relate to other fans of the same team, or in music promotion, where we are encouraged to identify very personally with bands and other fans or aficionados.

How do we talk about audiences? One way is to use a DEMOGRAPHIC hierarchy.


Alternatively, we can use PSYCHOGRAPHICS, which focuses more on the audience's attitudes, beliefs and values than on their income. For example, how would a reader's political beliefs influence their choice of newspaper? How might age influence their choice of online or offline news provider? If someone likes sport, are they more likely to pick a tabloid or broadsheet? 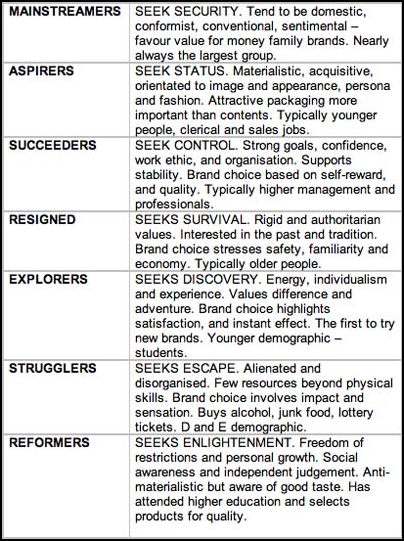 Audience research forms a huge part of the work done in the media. The SCMP, for example, have a very clear picture of who their audience is: see here.

Another way to discuss audiences and what they want or need (that is, what USES and GRATIFICATIONS they seek out) is through the use Of MASLOW'S HIERARCHY:

Think about the BASIC questions...

WHO IS THE AUDIENCE?

HOW ARE THEY SUPPOSED TO APPEAL TO THE AUDIENCE?

WILL THEY HAVE ANY EFFECT ON THE AUDIENCE?


BACK TO KEY CONCEPTS PAGE