Start here if you are not sure what a pre-production project is!

BRIEF:
I am planning to make a promotional video advertising SPCA adoption department. The purpose of this video is to persuade families and get them to adopt pets from SPCA.
My video will be aimed at adults because most adverts i have seen on the Internet (youtube.com) are aimed at adults. They are generally aimed at adults because they have the legal requirement to adopt animals from SPCA.
The length of this video will be around 30 seconds.
I have contacted SPCA and they requested a detailed plan on the promotional video.
Other people who are doing SPCA includes: Francesca

I am sorry to say at this stage, if you have not decided with what you are going to do with your content of your homework, we can not offer you further assistance.

However I would suggest you to check on our website at www.spca.org.hk to get your ideas and relevant information.

In this video located above, shows a promotional video advertising SPCA and making the audience adopt pets from SPCA. This video is targeted at adults which is aged 24+, i reckon this is the age for the audience because looking at the advert we can see the user is around 24-30 years old.
At the beginning of the video, we can see a man walking towards this other man who is sleeping. From the look of the man we can tell he wants to do something with the man who is sleeping.
This opening can attract audience to continue watching because the audience would want to know what happens to the man who is sleeping. As the video progress, the man sits on the couch and carried the man who is sleeping, then he started to scratch his stomach. This could be funny for many viewers which is good because comedy can attract viewers to continue/concentrate on the video more.
The end slogan is the strongest part in the advert because it says "somethings you can only do with a pet" which is shown on the advert by a man scratching the other mans belly, which the action can only be done on a dog.
I think this is a strong advert because it puts the viewer in a situation where they have no pet and in a situation where the user needs a pet urgently

In this second video, we can see the colour pallet is much brighter which is more eye catching. This video is promoting to stop animal abuse or misuse of animal, this promotional video is aimed at everyone who owns a pet this is because everyone can perform the act of animal abuse.
At the start we can see the father and mother giving the pet dog to their daughter, this gives the viewer a warm and nice feel towards the video. The dog is shown throughout the video together with the girl which shows warmth and happiness until the girl is prepared for school and went away. While the mother in the video packs her room she picked up the dog and switched off the power on the dog. This shows animal abuse as the dog was used as a toy and switched on and off whenever they wanted, this is forcing the dog to be active or not. As the phrase said "when the novelty wears off, you can switch them off"

This video have quick camera cuts which fits the bright pallet. The type of dog used is a pug which fits with the colour scheme and the girl in the video. 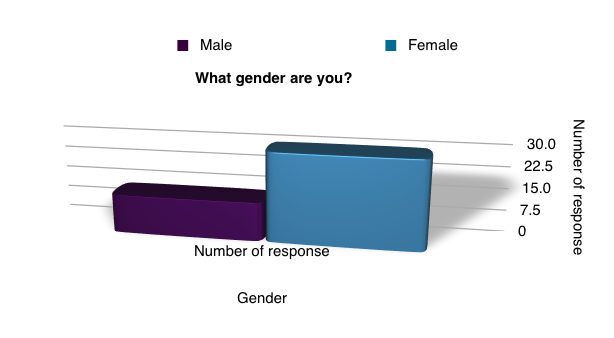 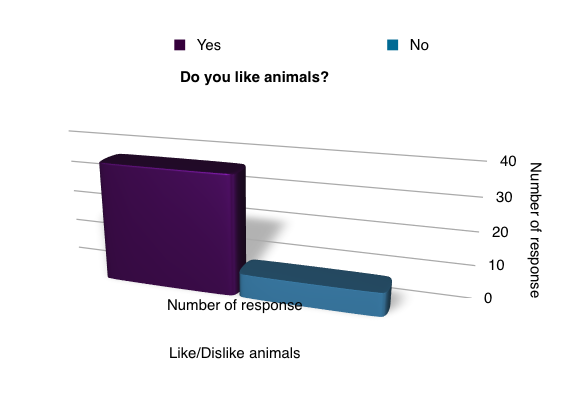 Comparing this with my first question, I can see that most of the people who likes animals are female.

This can help me determine if people wants to buy or adopt pet animal because people who doesn't have any pet at the moment will more likely to buy/adopt pets and people who owns a pet will least likely to adopt another one. This is because most cat or dog may not like another animal running around the house. 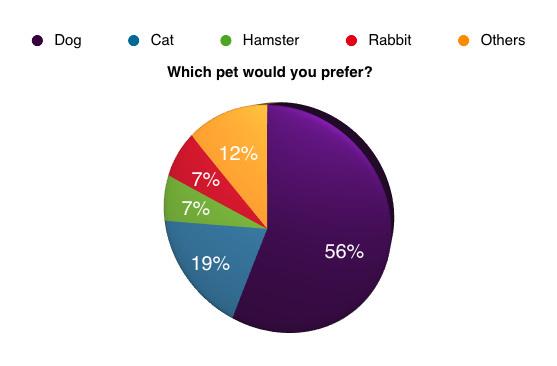 This question helps me see that the people in hong kong prefer bigger pets like cats and dogs but there are a small portion of them who prefer smaller pets.

My advert should include:
> Dog or cat in the video. But there can be minor parts which include smaller household pets eg, hamster rabbit etc
>Information on how to adopt pet since most people are already interested in adopting a pet from SPCA
>Some persuasive content because not everyone is persuaded to adopt pet from SPCA.
>Some people already own a pet so some parts in the video should show how pets can get along together.
My survey link:
http://www.surveymonkey.com/MySurvey_Responses.aspx?sm=xGMBHEq4Dsw3HcJ%2frKn4un7p96QCTwZbIpYCG1ezpGE%3d

The storyboard / mock up / whatever planning method is appropriate to your task. It should be digitised and embedded on this page. You should be able to show what influence the results of your market research have had on your final ideas and approach.

You should have designed a logo for SIS TV. Include your design (and a brief paragraph explaining what you were trying to achieve) here.

BACK TO PRE-PRODUCTION PAGE

BACK TO GCSE MEDIA STUDIES