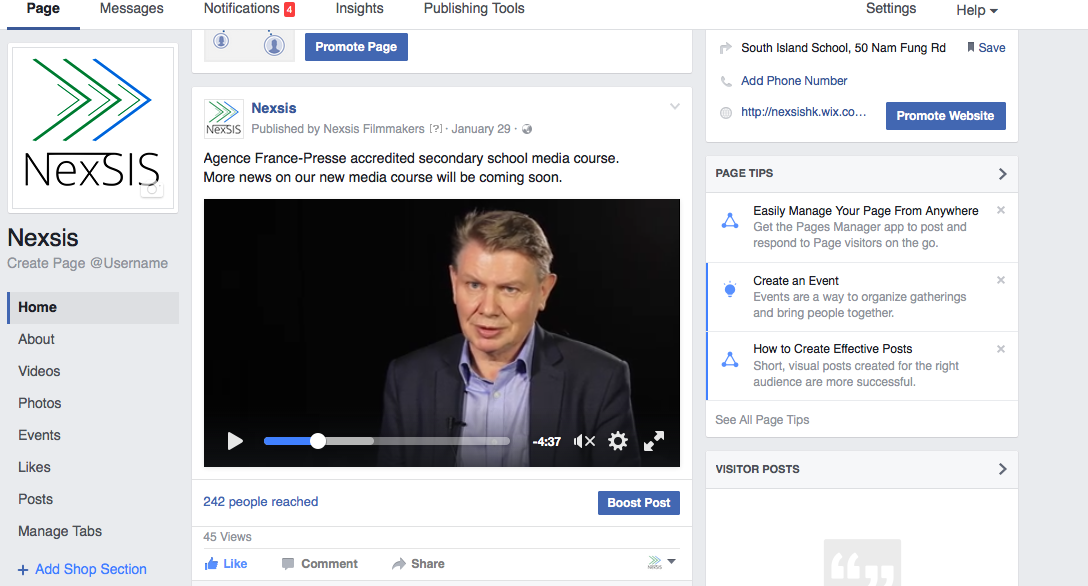 You can visit our NexSIS Facebook page for updates associated with commissioned projects. You will have the opportunity to produce client based work at the start of Y11 whilst you will meet Eric in person toward the end of Year 10 when we begin work on the AFP social media unit.

The AFP Foundation has a remit for education across the globe and in particular the spread of quality, ethically sound journalism in developing nations. This corresponds closely with South Island School, which is underpinned by the desire to ‘Make a Difference,’ both locally in Hong Kong and via our international partners, many of which are based in developing countries.

A key reason for the involvement of the AFP is the role played by Eric Wishart in fostering a spirit of collaboration and synergy between the South Island Film, TV & Media department and the AFP. This dates back to 2007 with several SIS students completing work placements with the AFP including Hugo Montagne and Leo Watson. Watson's placement was particularly successful as his photograph of former Hong Kong governor; Chris Patten went out on the wire.

Eric Wishart has continued to play a key role in supporting both the department and even Theory of Knowledge, a core element of the International Baccalaureate pursued by many international schools in Hong Kong, including South Island.

Eric is currently in the process of setting up a website alongside Year 12 South Island students, Anirudh Kannan and Zaid Syed for the use of topical, news based blogs from which we intend to elicit tasks for students. This is partnered with Wishart’s twitter account @iMediaMash, which will also be used as in future assessments. This exciting possibility addresses the need for immediacy with students briefed via social media and based on breaking news. Critical analysis skills and the ability to navigate transmedia forms will be an essential skill set taught and assessed, as evidenced by Wishart in several presentations to South Island students in recent years.

Furthermore, we believe as a department that news media, which has such strong ties to politics, current affairs, economics, sport, culture, social media and which investigates or represents just about every facet of life, should be central to our course. As a world-renowned news agency, the Agency France-Presse Foundation is a powerful metaphor of quality, objectivity and media literacy all of which are aspirational values associated with the new course.

We also believe that Hong Kong parents are unlikely to support an alternative to the GCSE qualification unless a recognisable name accredits our new course. It seems logical that a more authentic relationship be fostered in the construction of media synergy between the department and institutes already established in media.